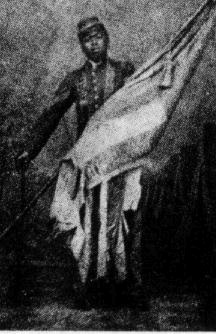 Should have been portrayed in the film:

Rank and organization: Sergeant, Company C, 54th Massachusetts Colored Infantry. Place and date: At Fort Wagner, S.C., 18 July 1863. Entered service at: New Bedford, Mass. Birth: Norfolk, Va. Date of issue: 23 May 1900. Citation: When the color sergeant was shot down, this soldier grasped the flag, led the way to the parapet, and planted the colors thereon. When the troops fell back he brought off the flag, under a fierce fire in which he was twice severely wounded.

Carney was the first black soldier to receive the Medal of Honor, although like Joshua Lawrence Chamberlain, he would have to wait over three decades for it. Born a slave in Virginia, he was studying for the ministry when he learned that the first regiment of black soldiers, the 54th Massachusetts, was being formed, and decided that he "could best serve my God by serving my country and my oppressed brothers." During the 54th Massachusetts' assault on Fort Wagner, the color bearer was fatally shot, and Carney grabbed the flag before it fell and then carried it throughout the remainder of the battle. Although the citation reads that he was twice severely wounded, he actually suffered multiple gunshot wounds in the head, chest, legs and one arm. He ended up carrying the flag to safety when the 54th was driven back by a Confederate counterattack. When a soldier from another regiment offered to take the flag so Carney could seek medical aid, he replied, "No one but a member of the 54th should carry the colors!" Upon carrying the flag back into camp after the battle, he received rousing cheers from other units but simply replied, typically for a Medal of Honor recipient, "I only did my duty."

Hollywood really did William H. Carney an injustice by omitting him from the film. For all the voice-over quotations from the letters of Colonel Robert G. Shaw, commander of the 54th Massachusetts (played by Matthew Broderick), and the participation of several authentically uniformed and equipped Civil War reenactors lending an air of authenticity, from a standpoint of historical accuracy Carney's omission is part of a huge flaw throughout the film of which the viewing public is little aware: aside from Colonel Shaw, and the brief appearances by his parents, Massachusetts Governor John Andrew and abolitionist Frederick Douglass, Glory obliterates the dramatic true stories of many real-life figures, and replaces them with fictionalized, and in some cases rather anachronistic, characters for the sake of melodrama, political correctness, revisionist history and other hidden agendas. Another real-life figure trampled on, for example, was Lewis Douglass, son of Frederick and the actual Sergeant Major of the 54th, replaced on film by gravedigger John Rawlins (played by Morgan Freeman); apparently it did not suit the producers, in attempting to project a picture of egalitarianism within the ranks of the 54th, for the fact to be known that like the Boston Brahmin Shaw, even the higher-ranking among the black enlisted men were from families of influence. (In contrast, the other major Civil War epic of this era, Gettysburg, had only one fictionalized character among the major figures, despite being adapted from an historical novel.)

The fictional Corporal Thomas Searles (played by Andre Braugher), is probably the figure most resembling Carney in the film, but it is still a stretch. Rather than an ex-slave, Searles is depicted as a rather sheltered freeborn Bostonian childhood friend of Shaw, easily broken down and slow to toughen up in basic training. Although he is seen picking up the flag, getting wounded once and then pressing on with the attack, nothing is seen specifically of Searles after the 54th charges into a barrage of Confederate artillery canister. (The inference is that his is among those bodies being dumped in a mass grave with Shaw's.) That does nothing for the name and memory of William H. Carney, and only scratches the surface of what he endured, and the valor and gallantry he exhibited that night.