History, Legend and Myth:
Hollywood and the Medal of Honor 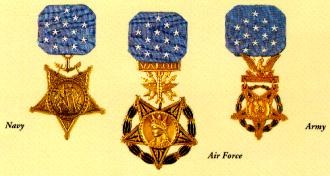 A friendly challenge to our
British Allies and Friends!
(Or to any fans of British military history and/or war movies, for that matter!)

The authors first issued this friendly challenge back in October 1999 when our page on Thomas Ward Custer was reprinted in The Guidon, a magazine dedicated to the life and times of George Armstrong Custer which is published in Britain, although we haven't gotten around to posting this challenge on this website until June 2002. Our challenge is simply this:

The Victoria Cross, the British Empire/Commonwealth's highest military decoration and the equivalent of America's Medal of Honor, actually predates the Medal of Honor by nearly a decade, the Victoria Cross having been created during the Crimean War of the 1850s, while the Medal of Honor was created in 1862 during the Civil War. Furthermore, Britain's film industry is also about as old as, and has evolved simultaneously with, that of Hollywood. Consequently, there are a few movies out there which have depicted the real-life actions of Empire/Commonwealth servicemen which have earned them the Victoria Cross, just as those movies we've discussed on this website have depicted real-life Medal of Honor-earning actions.

Unfortunately, the authors consider the British military and the Victoria Cross to be well beyond the scope of this website, and are waiting for someone else to create an analogous website for Victoria Cross recipients depicted on film. We'll even get you started by mentioning two films: The Dam Busters (1954) which starred Richard Todd as RAF Wing Commmander Guy Gibson, and Zulu (1964) which depicted the Victoria Cross-earning actions of several men who fought at the Battle of Rorke's Drift.

If anyone decides to take up our challenge, or is aware of someone who has already created such a website which we've missed on the various search engines, or would like any further assistance from us, please EMail us at lpadilla@voicenet.com. We'll be glad and honored to link to it.