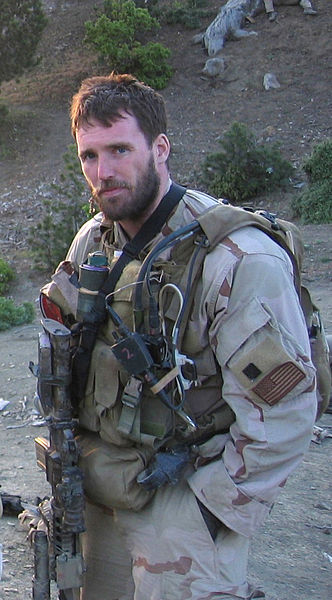 Citation: For conspicuous gallantry and intrepidity at the risk of his life above and beyond the call of duty as the leader of a special reconnaissance element with Naval Special Warfare Task Unit Afghanistan on 27 and 28 June 2005. While leading a mission to locate a high-level anti-coalition militia leader, Lieutenant Murphy demonstrated extraordinary heroism in the face of grave danger in the vicinity of Asadabad, Konar Province, Afghanistan. On 28 June 2005, operating in an extremely rugged enemy-controlled area, Lieutenant Murphy's team was discovered by anti-coalition militia sympathizers, who revealed their position to Taliban fighters. As a result, between 30 and 40 enemy fighters besieged his four-member team. Demonstrating exceptional resolve, Lieutenant Murphy valiantly led his men in engaging the large enemy force. The ensuing fierce firefight resulted in numerous enemy casualties, as well as the wounding of all four members of the team. Ignoring his own wounds and demonstrating exceptional composure, Lieutenant Murphy continued to lead and encourage his men. When the primary communicator fell mortally wounded, Lieutenant Murphy repeatedly attempted to call for assistance for his beleaguered teammates. Realizing the impossibility of communicating in the extreme terrain, and in the face of almost certain death, he fought his way into open terrain to gain a better position to transmit a call. This deliberate, heroic act deprived him of cover, exposing him to direct enemy fire. Finally achieving contact with his Headquarters, Lieutenant Murphy maintained his exposed position while he provided his location and requested immediate support for his team. In his final act of bravery, he continued to engage the enemy until he was mortally wounded, gallantly giving his life for his country and for the cause of freedom. By his selfless leadership, courageous actions, and extraordinary devotion to duty, Lieutenant Murphy reflected great credit upon himself and upheld the highest traditions of the United States Naval Service.

Lone Survivor recounts the battle in which the US Navy Sea-Air-Land (SEAL) special warfare forces suffered their greatest single-day loss. Then-Petty Officer 2nd Class Marcus Luttrell (played in the film by Mark Wahlberg), co-author of the book from which the film was adapted, was the eponymous lone survivor of a four-man SEAL team sent into the Hindu Kush mountains along the Afghanistan-Pakistan border to capture or kill an al Qaeda leader located in one of the Taliban-controlled villages at the base of the mountains. Lieutenant Murphy led the close-knit team, which also included Petty Officers Matthew "Axe" Axelson (played by Ben Foster) and Daniel Dietz (played by Emile Hirsch). The team was inserted by an Army MH-47 Chinook helicopter at night and marched up the steep, mostly bare shale mountainside to an observation point which, due to the steepness and cragginess of the mountain, had poor satellite and cell phone coverage resulting in sporadic contact with higher headquarters.

Concealing themselves in a wooded area while surveilling the village, the team was literally stumbled upon by three goatherders (an old man and two teenagers) in whose possession they found a two-way radio indicating they were sympathetic to and in contact with the local Taliban/al Qaeda. Both the book and the film indicated much discussion and debate among the four team members over whether to let the goatherders and their goats go and abort the mission, or to kill the goatherders and continue the mission. Other websites discussing this film speculate that this may have been a dramatic embellishment by Luttrell's co-author Patrick Robinson and the screenwriters. In any case, the authors of this website will not "Monday morning quarterback" Murphy's ultimate command decision to treat the goatherders as noncombatants and release them, consider the mission compromised, and abort.

As with nearly all the other Classical Heroism entries on this website, the citation for the Medal of Honor recipient did not need any embellishment from the filmmakers. Resuming a concealed position to wait until dark to climb to higher ground and call for extraction, the four SEALs soon found at least 30 al Qaeda or Taliban guerrillas approaching them from the ridge above. (Luttrell believes that the number was at least 80, but 30 to 40 is the number cited in Murphy's citation above.) Luttrell saw that a guerrilla had spotted him and was aiming, and shot first. A full-blown firefight broke out, and the SEALs fought off the attack and killed a large number of guerrillas, with more guerrillas appearing over the ridge and streaming downhill toward both flanks of the SEALs' position. When the position became untenable, Murphy ordered the team to fall back, which actually meant jumping off the ledge their position was on, and falling, sliding down or tumbling down the shale cliffside. In the process, Murphy was shot in the abdomen, Dietz had the thumb of his shooting hand shot off, and all had sustained injuries from the fall and/or grenade or rock fragments.

As depicted in the film and Luttrell recounted in the book, during their falls and tumbles his rifle miraculously stayed within reach and his ammunition pouches stayed on him, but most of his other equipment, including the team's first aid supplies, were stripped off and scattered. He had to resort to packing the wounds of his teammates and himself with dirt to stanch the blood.

As the guerrillas mounted a new attack on the lower ledge where the SEALs had regrouped, Dietz was shot in the lower back, but all four SEALs continued fighting. When the lower ledge became untenable and Murphy again ordered them to fall back, the four men received additional propulsion and injuries from the blast of a rocket-propelled grenade. After sustaining more wounds, they came to a stop on another ledge, set up defensive positions there and continued to fight. Their total fall from their original position is estimated at 300 meters.

Dietz was the first to die, succumbing to at least eleven gunshots. At that point, despite his own wounds, Murphy decided to attempt to climb back up to the original position under fire to get cellular reception and call headquarters for extraction. He succeeded in establishing contact and reported the situation while sustaining what would be fatal gunshot wounds. Those at the SEAL command post who heard his call vividly remember that his last words after confirming his team's position were "Thank you." Dietz remembers hearing Murphy calling out to him for help before his gunfire silenced.

The guerrillas then succeeded in surrounding Axelson's individual defensive position and fatally shooting him. As they approached Luttrell, he managed to hide under a shale outcropping.

The remainder of the team's parent unit, Seal Team 10, quickly went into action upon receiving Murphy's message and mounted two MH-47s to extract his team, escorted by Army AH-64 Apache attack helicopters and Air Force A-10 Thunderbolt or "Warthog" attack aircraft. As they approached one potential landing zone elsewhere on the mountain, one of the MH-47s took a direct hit from a rocket-propelled grenade and crashed into the mountainside, killing the eight Army crewmen and eight members of SEAL Team 10 including Murphy's immediate commanding officer, Lieutenant Commander Erik Kristensen (played in the film by Eric Bana), bringing the death toll to 19 US servicemen. While in the film Luttrell is shown as witnessing the crash, in real life he was only aware of some excitement among the guerrillas surrounding him, and did not learn until much later of the severe losses, nearly all of whom were close friends.

While the film follows Luttrell's book and other recorded accounts faithfully up to this point, the depiction of the remainder of his ordeal is time-compressed and takes some dramatic license. He remained in hiding until dark and the guerrillas had left the area, then worked his way down the mountainside to a small creek where, while quenching his extreme thirst, he was discovered by Pashtun tribesmen who were essentially at war against the Taliban and took him to their village. The film depicts that over the next three days he was treated there by the village doctor and performed some of the first aid (removing some of the shale fragments from his wounds) himself, and while the village elder hiked over 30 miles to the Special Operations main headquarters at Bagram Air Base to deliver the news of his rescue, the elder's son, Gulab, hosted him at his home where Luttrell befriended his Gulab's young son. The Taliban is shown entering the village and seizing Luttrell, and are about to behead him when Gulab and other village warriors drive them off, and then later after Gulab's father delivers his message, Army Special Ops troops arrive by helicopter to extract Luttrell and a full blown firefight with the Taliban ensues with Talibani guerrillas again grabbing Luttrell and his killing one of his would-be captors in a knife fight. In actuality, Luttrell's stay with the Pashtun lasted nearly a week with his having an "entourage" of the village youngsters rather than just Gulab's son, the villagers spirited him away into the mountains whenever the Taliban came looking for him, and there was a protracted siege of the village by the Taliban with long-range firefights both before and during the arrival of the Army troops and helicopters. Lastly, Luttrell is shown in the film as going into cardiac arrest on the Medevac helicopter before being revived in the hospital-- presumably the filmmakers' symbolism of how a part of Luttrell died with his buddies-- when in actuality, he made a point of walking from the helicopter to the hospital.

On the introduction page of this website, the authors partially dedicate it to all those deserving of the Medal of Honor who did not receive it, particularly those whose valor was witnessed only by the enemy and by God. Had Marcus Luttrell not made good his escape and rescue to tell the tale with the aid of the Pashtun villagers, Michael Murphy might have ended up one of those.