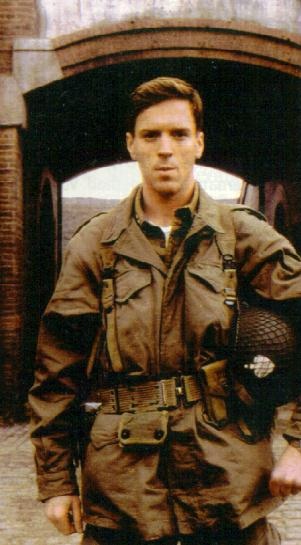 In the TV miniseries:

Command of Easy Company 2/506th PIR was thrust upon Dick Winters under the most trying of circumstances, on one of the most momentous days in American military history. On the night of June 5, 1944, the 82nd and 101st Airborne Divisions parachuted into the Cotentin peninsula in Normandy, France, as the lead elements of Operation Overlord, the Allied invasion of Normandy. The mission of the two airborne divisions was to block German reenforcements from reaching the beachheads, and to secure the causeways that crossed the flood plains immediately inland from the amphibious landing zone of the 4th Infantry Division (which was under the field command of Brigadier General Theodore Roosevelt Jr.), codenamed Utah Beach. This was the 506th Regiment's and the101st Division's first combat operation.

Exemplifying the military adage that "no plan, no matter how well conceived, survives the first contact with the enemy intact", the formations of C-47 transports carrying the two airborne divisions became scattered; this was due to a combination of cloud banks over Normandy, heavy German antiaircraft fire, and some of the advance pathfinder force (who were supposed to parachute in ahead of the main body to mark the drop zones with radio beacons) getting shot down. Some paratroopers missed their drop zones by as much as 20 miles, and units got intermixed among both divisions. Fortunately, the commanders of both divisions anticipated this eventuality and compensated for it by requiring all officers to be able to draw a map of the entire area from memory and memorize their own unit mission and those of sister units, and by giving instructions to form ad hoc units whenever necessary and that all German reenforcements moving toward the beach were to be engaged and delayed as much as possible.

The leader of 1st Platoon of Easy Company, Winters landed with the rest of the paratroopers on his C-47 near Ste. Mere Eglise, an 82nd Division objective 5 miles from their own drop zone in Ste. Marie-du-Mont. Unknown to them at the time, the C-47 carrying the company commander and most of the rest of the company headquarters section had been shot down nearby, killing all on board. After gathering up a dozen members of Easy Company and a handful of stragglers from other units, and determining their location, Winters marched them toward their original drop zone and, during the night, managed to ambush a German patrol and wagon convoy, and then find the 2nd Battalion headquarters. At dawn, the battalion discovered a German artillery battery of four 105 mm guns beginning to open up on the 4th Infantry Division on Utah Beach, protected by approximately 50 infantrymen, a network of trenches and the notorious Normandy hedgerows which enclosed the field in which they were located. As the ranking officer from Easy Company, Winters was ordered by the battalion commander to take the gun positions with the dozen men that now made up Easy Company plus six of the stragglers he had rounded up.

After a thorough reconaissance of the gun emplacements, Winters set up a base of fire with his two machine gun crews and mortar crew, then split his riflemen into two groups which assaulted the first gun position by bursting through the hedgerows from two directions using rifles, submachineguns and hand grenades. The network of trenches and hedgerows made the engagement more resemble World War I trench warfare (and specifically Corporal Alvin C. York's capture of a large German machine gun emplacement) than most other World War II engagements. Like York and his hopelessly outnumbered squad a generation earlier, Winters and his remnants of Easy Company convinced the Germans that they were being attacked by a much larger force, and the Germans retreated down the trenches with heavy losses. After taking the first two artillery pieces, Winters moved his machine gunners forward and repeated the process on the third. The handful of stragglers, led by then-Lieutenant Ronald Speirs (who at the time belonged to another company in 2nd Battalion) finished the job on the fourth gun. Unable to hold the position, Easy Company quickly destroyed the guns and associated equipment before withdrawing. With fewer than 20 men and outnumbered 3 to 1, with a loss of 4 dead and 2 wounded, Winters and Easy Company killed 12 Germans, captured 15, and drove off the remainder, wounding several of them. They contributed immeasurably to the opening of an avenue inland for Brig Gen Roosevelt and the 4th Division.

Winters was nominated for the Medal of Honor for this action by the commander of the 506th Regiment, Colonel Robert F. Sink. Unfortunately, according to Stephen E. Ambrose, author of the original book Band of Brothers, Supreme Headquarters arbitrarily imposed a limit of one Medal of Honor per division for Operation Overlord, and the one allocated to the 101st Airborne Division went posthumously to a battalion commmander in another regiment who led a bayonet charge on the advance inland and then was killed in action in a later operation. Winters' award was downgraded to a Distinguished Service Cross and the remainder of the participants in the assault received either Silver or Bronze Stars.

Winters remained the acting company commander for the rest of the Normandy campaign and was officially given the position and a promotion to captain shortly before Operation Market-Garden, the less than successful September 1944 invasion of Holland. He further distinguished himself during that campaign and rose rapidly to become the executive officer and then the commander of the 2nd Battalion during the 101st Airborne's legendary defense of Bastogne, Belgium in the December 1944 Battle of the Bulge, rising to major and remaining in command of the battalion for the remainder of the war.

The authors also could not help noticing a number of parallels between Winters and Joshua Lawrence Chamberlain, and between their respective units, Easy Company 506th Parachute Infantry of World War II and the 20th Maine Infantry of the Civil War. Both Winters and Chamberlain were previously second-in-command while the units were being formed and trained. The original commanders, Captain Herbert Sobel of Easy Company (played by David Schwimmer in Band of Brothers) and Colonel Adelbert Ames of the 20th Maine, were both despised by their men as martinets and taskmasters, so much so that the enlisted men talked privately about shooting both of them in battle at the first opportunity (a practice which has since become known as "fragging", as use of a fragmentation hand grenade became the method of choice during the Vietnam War for eliminating officers and NCOs deemed as incompetent and dangerous by the troops). While Ames, a West Pointer and combat veteran, mentored and tutored Chamberlain however, Sobel considered Winters a threat to his leadership, clashed frequently with him and eventually had him transferred to Battalion HQ, with Winters not returning to Easy Company as a platoon leader until Sobel himself was replaced. As despised as both Sobel and Ames were, though, in postwar retrospect the men of both units credited them with toughening the units into the exceptional fighting forces they became. Both Winters and Chamberlain rose to higher command but continued their close association with their old units, and both were offered commissions in the Regular Army at the end of their respective wars but chose to enter the reserve components. Completing the parallels, both men were succeeded in command of the units by two officers with very similar surnames, who had fought alongside them during the respective Medal of Honor-nominated actions, Captain Ronald Speirs assuming command of Easy Company and Colonel Ellis Spear assuming command of the 20th Maine. If the original book Band of Brothers were not a well-documented nonfiction work with many of the men involved still very much alive, one might suspect author Stephen E. Ambrose of plagiarizing John J. Pullen's The Twentieth Maine and Michael Shaara's The Killer Angels. As it is, the miniseries Band of Brothers ranks up there with Gettysburg and Thirty Seconds Over Tokyo in terms of both historical accuracy and faithfulness to the original book, helped tremendously by the fact that Winters and several of the other living members of Easy Company had taken an active part in the production. Once again, truth is stranger and more entertaining than fiction.