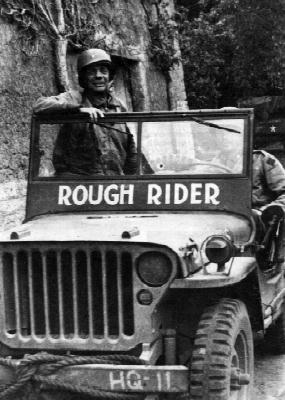 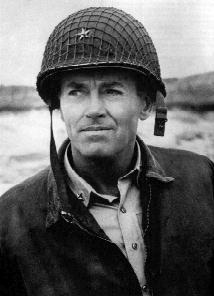 Rank and organization: brigadier general, U.S. Army. Place and date: Normandy invasion, 6 June 1944. Entered service at: Oyster Bay, N.Y. Birth: Oyster Bay, N.Y. G.O. No.: 77, 28 September 1944. Citation: for gallantry and intrepidity at the risk of his life above and beyond the call of duty on 6 June 1944, in France. After 2 verbal requests to accompany the leading assault elements in the Normandy invasion had been denied, Brig. Gen. Roosevelt's written request for this mission was approved and he landed with the first wave of the forces assaulting the enemy-held beaches. He repeatedly led groups from the beach, over the seawall and established them inland. His valor, courage, and presence in the very front of the attack and his complete unconcern at being under heavy fire inspired the troops to heights of enthusiasm and self-sacrifice. Although the enemy had the beach under constant direct fire, Brig. Gen. Roosevelt moved from one locality to another, rallying men around him, directed and personally led them against the enemy. Under his seasoned, precise, calm, and unfaltering leadership, assault troops reduced beach strong points and rapidly moved inland with minimum casualties. He thus contributed substantially to the successful establishment of the beachhead in France .

Theodore Roosevelt, Jr. was the first Allied general officer to wade ashore on the Normandy beachhead (not counting those who landed in the airborne assault further inland) and the only general in the first amphibious wave. Due to a navigational error on the part of the landing craft crews, the first wave of the 4th Infantry Division landed on the wrong inlet on Utah Beach which, fortunately for them, was less heavily defended than their original objective. Quickly assessing the situation and seizing the initiative and advantage, Roosevelt re-routed the remainder of the division into the new sector ("We'll start the war from here!" was his famous line, echoed by Henry Fonda onscreen), overwhelmed the defenses and rapidly drove inland. The 4th Infantry Division then proceeded to outflank the Germans on their initial objective, clear the entire beachhead, and link up with the airborne assault forces with fewer casualties than the divisions on the other four beachheads. Armed only with a pistol and walking with a cane due to arthritis, he led several assaults along the beachhead in what then-Lieutenant General Omar N. Bradley, commander of the US 1st Army and of the overall amphibious operation, would later describe as the single bravest act he witnessed in the entire war.

Bravery in battle was, of course, nothing new to the Roosevelts of Oyster Bay. Roosevelt and his three brothers had all been blooded in combat in the First World War. Youngest brother Quentin was killed in action as a fighter pilot with the 95th "Kicking Mule" Squadron (sister unit to Eddie Rickenbacker's famed 94th "Hat in the Ring" Squadron) in July 1918. Their father had himself sought to be reactivated in the army for combat in that war (at the age of 58, eight years after retiring from the Presidency of the United States!). Elsewhere on the Normandy beaches that June morning in 1944 was Theodore Roosevelt, Jr.'s own son, Quentin Roosevelt II, whom he had named, of course, for his fallen brother and who was returning to combat after being severely wounded in the North African campaign; Theodore Jr. and Quentin II were the only father-and-son pair known to have landed in Normandy on D-Day.

The two Theodore Roosevelts were also the second father-and-son pair to become Medal of Honor recipients after Arthur and Douglas MacArthur, although not until after both men had been dead and buried for decades. By all objective criteria, the elder Roosevelt's valor and gallantry, in leading the legendary charge of his 1st US Volunteer Cavalry "Rough Riders" Regiment up Kettle and San Juan Hills in Cuba on 1 July 1898, during the Spanish-American War, should have earned him the medal. A nomination was duly submitted by his chain of command. While it was enroute, however, he made the fatal mistake of criticizing the War Department in a letter to the press, after the US troops' departure from Cuba was delayed and the Rough Riders had been forced to bivouac in a mosquito-infested swamp, losing more men to malaria than they had in combat. The Secretary of War quickly squashed the award in retaliation, and 46 years would elapse before the name of Theodore Roosevelt would be seen on a Medal of Honor citation, and over a century would elapse before, in January 2001 after years of review by Congress and the Department of the Army, the elder Theodore Roosevelt received his Medal of Honor for the Battle of San Juan Hill, eighty-two years posthumously. As it was, the elder Theodore Roosevelt would become more responsible than any other individual for deflating the value of the Medal of Honor and making it the ultimate decoration it has become; upon ascending to the Presidency in 1901, he took measures to ensure that only those actions which surpassed his own in Cuba would be worthy of the medal, and his charge up San Juan Hill became the yardstick for future Medals of Honor.

In the film, there is a scene where, prior to the assault, Roosevelt gets into a discussion with Major General Raymond O. Barton (played by Edmond O'Brien), the division commander, over his need to live up to his father's name and heroism. Whether or not such a conversation actually took place as depicted, it is interesting to note that in the book by Cornelius Ryan on which the screenplay was based, there is absolutely no mention of, or even any allusion to, the elder Theodore Roosevelt. In fact, Ryan's book refers only to "Brigadier General Theodore Roosevelt" with the "Junior" omitted. Conversely, there is no depiction or mention of Quentin Roosevelt II in the film, but he is mentioned briefly in the book. With the broad scope of The Longest Day, Henry Fonda's portrayal of Roosevelt was only one in literally a cast of thousands, and with the frequent scene-shifting of the film, the depiction of his heroism unfortunately becomes somewhat disjointed and diluted. This becomes more evident when held in contrast with the depiction of the Medal of Honor-earning acts of Joshua Lawrence Chamberlain in Gettysburg, the two films and the two respective battles depicted within them being quite comparable in scope.

Roosevelt was actually the second of two Medal of Honor recipients who were sons of former Presidents of the United States; Lieutenant Colonel Webb C. Hayes, the son of Rutherford B. Hayes, received his medal for action during the Philippine Insurrection in 1899. (Any person suggesting the involvement of political favoritism in these awards should be aware that both fathers were deceased, and had been out of office for decades, at the time of their sons' actions. We are also reminded that although the incumbent President at the time of Roosevelt's action was his cousin Franklin, the "Hyde Park Branch" of the family, of which Franklin was was the patriarch, were of the opposing political party to, and in the midst of a family feud with, the "Oyster Bay Branch".)

Theodore Roosevelt, Jr. died of a heart attack on the battlefield in Normandy five weeks after D-Day, just before word arrived at his headquarters that he had been promoted to Major General and reassigned to command of another division. Setting aside the family feud as he presented his widow with the Medal of Honor, Franklin D. Roosevelt said simply, "His father would have been proudest."