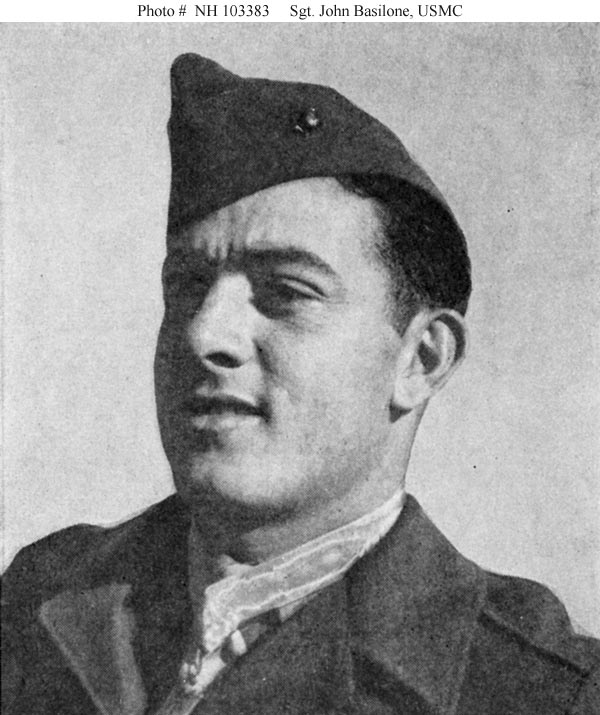 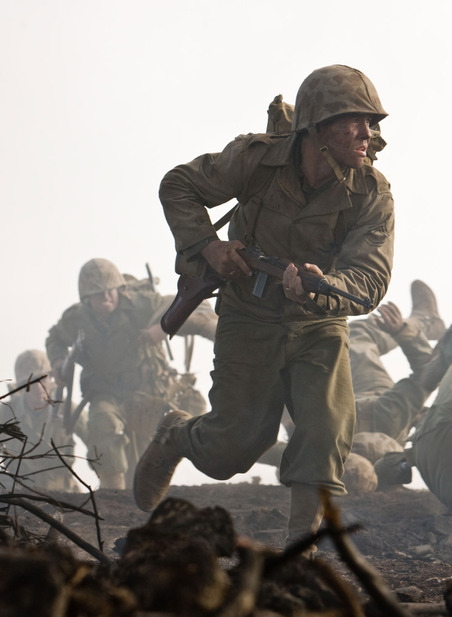 In the TV miniseries:

Citation: For extraordinary heroism and conspicuous gallantry in action against enemy Japanese forces, above and beyond the call of duty, while serving with the 1st Battalion, 7th Marines, 1st Marine Division in the Lunga Area. Guadalcanal, Solomon Islands, on 24 and 25 October 1942. While the enemy was hammering at the Marines' defensive positions, Sgt. Basilone, in charge of 2 sections of heavy machineguns, fought valiantly to check the savage and determined assault. In a fierce frontal attack with the Japanese blasting his guns with grenades and mortar fire, one of Sgt. Basilone's sections, with its guncrews, was put out of action, leaving only 2 men able to carry on. Moving an extra gun into position, he placed it in action, then, under continual fire, repaired another and personally manned it, gallantly holding his line until replacements arrived. A little later, with ammunition critically low and the supply lines cut off, Sgt. Basilone, at great risk of his life and in the face of continued enemy attack, battled his way through hostile lines with urgently needed shells for his gunners, thereby contributing in large measure to the virtual annihilation of a Japanese regiment. His great personal valor and courageous initiative were in keeping with the highest traditions of the U.S. Naval Service.

for service as set forth in the following CITATION:

For extraordinary heroism while serving as a Leader of a Machine-Gun Section, Company C, 1st Battalion, 27th Marines, 5th Marine Division, in action against enemy Japanese forces on Iwo Jima in the Volcano Islands, 19 February 1945. Shrewdly gauging the tactical situation shortly after landing when his company's advance was held up by the concentrated fire of a heavily fortified Japanese blockhouse, Gunnery Sergeant Basilone boldly defied the smashing bombardment of heavy caliber fire to work his way around the flank and up to a position directly on top of the blockhouse and then, attacking with grenades and demolitions, single handedly destroyed the entire hostile strong point and its defending garrison. Consistently daring and aggressive as he fought his way over the battle-torn beach and up the sloping, gun-studded terraces toward Airfield Number 1, he repeatedly exposed himself to the blasting fury of exploding shells and later in the day coolly proceeded to the aid of a friendly tank which had been trapped in an enemy mine field under intense mortar and artillery barrages, skillfully guiding the heavy vehicle over the hazardous terrain to safety, despite the overwhelming volume of hostile fire. In the forefront of the assault at all times, he pushed forward with dauntless courage and iron determination until, moving upon the edge of the airfield, he fell, instantly killed by a bursting mortar shell. Stouthearted and indomitable, Gunnery Sergeant Basilone, by his intrepid initiative, outstanding skill, and valiant spirit of self-sacrifice in the face of the fanatic opposition, contributed materially to the advance of his company during the early critical period of the assault, and his unwavering devotion to duty throughout the bitter conflict was an inspiration to his comrades and reflects the highest credit upon Gunnery Sergeant Basilone and the United States Naval Service. He gallantly gave his life in the service of his country.

From the 20th Century onward, the majority of Medals of Honor have been awarded posthumously, while at the same time, the various services have always generally recognized that America prefers to have live heroes. Consequently, it has usually been policy for living Medal of Honor recipients to be rotated out of combat and into various public relations activities (such as War Bond sales drives), or at least be offered that opportunity. Quite a number of these men have either declined the offer or, after fulfilling their public relations duties, insisted on returning to combat, and some of them have tragically been killed in subsequent combat. John Basilone was one of those men, and his story was interwoven with those of several other United States Marines who served with the 1st Marine Division to make up the miniseries The Pacific.

John Basilone had enlisted in the US Army in the late 1930s and served as an infantryman in the Philippines, while winning several boxing titles. After his enlistment ended, he briefly returned home to Raritan, New Jersey (not far from Rutgers University in New Brunswick, the authors' alma mater) and worked as a truck driver before deciding he wanted to return to the service and to the Philippines. Figuring it would improve his chances for that end assignment, he went in the US Marine Corps for his next enlistment. The entry of the United States into World War II after the attack on Pearl Harbor found him a sergeant and a machine gunner in the1st Battalion of the 7th Marine Regiment, under the command of then-Lieutenant Colonel Lewis B. "Chesty" Puller (played in the miniseries by William Sadler), whose name would equal his own in Marine Corps lore and reverence.

While in real life Basilone's constant reminiscences of his time in the Philippines earned him the nickname "Manila John", that was not referred to in the miniseries. Ironically, the Allied forces in the Pacific Theater were divided geographically between those under the command of General Douglas MacArthur in the Southwest Pacific and Admiral Chester W. Nimitz in the Central Pacific, with the majority of Marine Corps forces falling under the latter. While MacArthur fulfilled his own much more dramatic and publicized vow to return to the Philippines, Basilone didn't.

Basilone and the 7th Marines were soon involved in the intense fighting against the Japanese in the first major American offensive in the Pacific, on the island of Guadalcanal. The prolonged fighting to take and then defend the island's main airfield (soon named Henderson Field) became the most intense of the entire campaign, and Basilone's 15-man machine gun section found themselves along with the rest of their battalion defending their position near Henderson Field against a human wave attack of approximately 3000 Japanese infantry on the night of 24-25 October 1942. The intensity of the fighting, as noted in the above citation, was well-depicted in The Pacific, as was the emotional strain Basilone endured from losing so many of his men including one of his closest friends.

[Two other Marine NCOs who defended their positions outside Henderson Field with machine guns against night-long Japanese human wave attacks also inspired depiction on film: Sergeant Al Schmid, who was blinded by a hand grenade but continued firing under the direction of a wounded crew mate two months earlier than Basilone's action, and received the Navy Cross; he was portrayed by John Garfield in Pride of the Marines (1945). Platoon Sergeant Mitchell Paige, who was awarded the Medal of Honor for actions nearly identical to John Basilone's the night following Basilone's action, was the inspiration for Chad Everett's fictionalized main character Jack Connell in First to Fight (1967), although it may be argued that Connell was a composite of both Paige and Basilone.]

Basilone was awarded the Medal of Honor while the1st Marine Division was on R&R in Melbourne, Australia (before sending the awardee stateside to the White House to receive the medal directly from the President became a more common practice) by division commander Major General Alexander A. Vandegrift (portrayed in the film by Stephen Leeder), who would himself soon receive the Medal of Honor for his actions in the overall Solomon Islands campaign and rise to become Commandant of the Marine Corps and the first full (four star) general in the Marines before the war's end.

The miniseries continues to intertwine Basilone's story with those of the other Marines. He was sent home as a hero and sent on several war bond tours, briefly enjoying the celebrity life, including living in Hollywood, before he quickly tired of that life and requested return to a combat unit. In December 1943, he was assigned to the training base at Camp Pendleton, California where he met and began a courtship with a female mess sergeant, Lena Riggi (played in the miniseries by Annie Parisse), whom he married in July 1944.

Basilone, by then a Gunnery Sergeant, returned to combat as a member of the 1st Battalion 27th Marine Regiment, 5th Marine Division, in the bloodiest battle in Marine Corps history, on the island of Iwo Jima. On 19 February 1945, the D-Day for the Iwo Jima landing, he in a sense came full-circle with his Medal of Honor action over two years earlier in a vicious fight over an airfield on a Pacific island, albeit in an offensive rather than defensive action. Leading his men inland past several Japanese obstacles, pillboxes and other strong points from the beach to the airfield, John Basilone was killed by a mortar burst at the edge of the airfield. Word of his death struck the entire American invasion force as a shock wave.

Considering both his stature as a hero and his part as a central figure in the miniseries, the depiction of his last day of life seems rather like the "Reader's Digest Condensed Version", when compared to the above posthumous citation for the Navy Cross he received, and other records.

Lena Basilone, who did not meet her in-laws until after the war, never remarried. Some sources indicate that she first met her late husband's family at the actual dedication ceremony for a monument to him in Raritan, rather than her visiting their home as depicted in the miniseries.

On our page on Thomas Ward Custer, the highest-decorated soldier of the Civil War with two Medals of Honor, who was subsequently killed in action at the Battle of the Little Bighorn alongside his more famous older brother, the authors analogize his death as the equivalent of Alvin York making a career of the Army and his getting beaten and beheaded at the Bataan Death March, or Audie Murphy's post-World War II National Guard unit getting mobilized for the Korean War and his getting killed on Pork Chop Hill. While he was not the highest decorated servicemember of World War II (that distinction goes to Murphy) John Basilone's heroism and death arguably come the closest to fulfilling that analogy in reality.