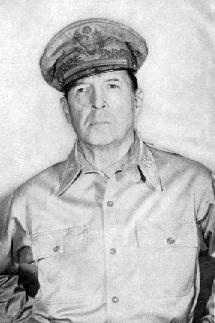 General, Commanding General of all US and Philippine Armed Forces in the Philippines. 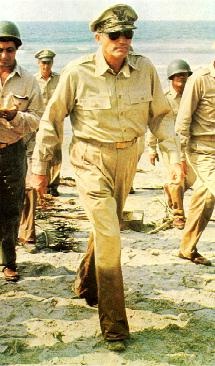 Rank and organization: General, U.S. Army, commanding U.S. Army Forces in the Far East. Place and date: Bataan Peninsula, Philippine Islands. Entered service at: Ashland, Wis. Birth: Little Rock, Ark. G.O. No.: 16, 1 April 1942. Citation: For conspicuous leadership in preparing the Philippine Islands to resist conquest, for gallantry and intrepidity above and beyond the call of duty in action against invading Japanese forces, and for the heroic conduct of defensive and offensive operations on the Bataan Peninsula. He mobilized, trained, and led an army which has received world acclaim for its gallant defense against a tremendous superiority of enemy forces in men and arms. His utter disregard of personal danger under heavy fire and aerial bombardment, his calm judgment in each crisis, inspired his troops, galvanized the spirit of resistance of the Filipino people, and confirmed the faith of the American people in their Armed Forces.

As depicted in the film, MacArthur received the Medal of Honor for gallantry while commanding the forces resisting the Japanese invasion of the Philippines in 1941-42. When initially ordered by President Franklin D. Roosevelt to pass command and evacuate to Australia to reorganize the theater Allied forces, he initially tendered the resignation of his commission with the intention of fighting on in the Philippines as an enlisted man, but this was refused by FDR.

As Gregory Peck also mentions in the film, MacArthur's father, then-Lieutenant Arthur MacArthur of the 24th Wisconsin Infantry, had earned the Medal of Honor at Missionary Ridge, Tennessee during the Civil War. This made the two men the first of only two father and son Medal of Honor recipient pairs. (The two Theodore Roosevelts, discussed elsewhere on this website, are the second pair.)

The film is often compared less favorably with Patton, the earlier seven-Oscar effort of producer Frank McCarthy. This is due primarily to the attempt to cram ten years of MacArthur's life (from the Japanese invasion at the start of World War II to his relief from command by President Truman during the Korean War) into two hours whereas Patton covered two years of its subject's life in three hours. MacArthur's defense of the Philippines, which opens the film, was nevertheless a story which, rare among the films discussed on this website, made for good psychological drama as opposed to battlefield heroics; this was also a rare case where the Medal of Honor action was the beginning and not the climax of the film, but still worked for dramatic purposes. The story of Major General Jonathan M. Wainwright's Medal of Honor, discussed in a separate entry of this volume, is also covered in the film and adds to the psychological drama.

There is one glaring historical error in MacArthur, not related to the Medals of Honor, which the authors are compelled to point out. MacArthur conducted three separate and successive amphibious landings during the liberation of the Philippines: Leyte Island in the eastern central portion of the archipelago in October 1944; Mindoro Island in the western central portion of the archipelago in December 1944, and Lingayen Gulf on the northwest coast of the largest and northernmost island, Luzon, in January 1945. In the film, as MacArthur discusses his plans for the liberation of the Philippines with President Roosevelt, he points to Lingayen Gulf and says "We'll land at Leyte Beach on Luzon...." Scaling up a map of the Philippines and transposing it onto one of the USA, that is the equivalent of pointing at Puget Sound and saying, "We'll land at Chesapeake Bay in Washington State...."! Author Lyle F. Padilla, who was born in Manila and as a 5 year old boy actually once met General MacArthur, still cringes every time he sees this scene, and could not mention the film in this volume and let this error pass unchallenged! 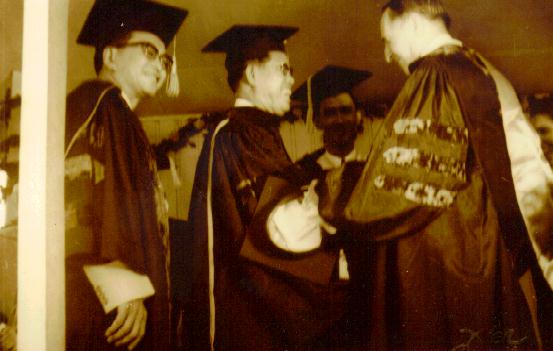