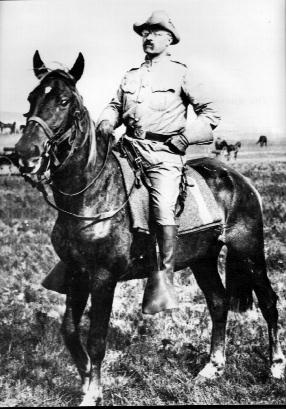 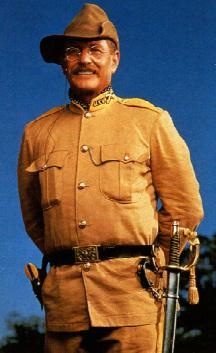 The President of the United States of America, authorized by Act of Congress, March 3, 1863, has awarded in the name of The Congress the Medal of Honor to:

for conspicuous gallantry and intrepidity at the risk of his life above and beyond the call of duty.

Lieutenant Colonel Theodore Roosevelt distinguished himself by acts of bravery on 1 July 1898, near Santiago de Cuba, Republic of Cuba, while leading a daring charge up San Juan Hill. Lieutenant Colonel Roosevelt, in total disregard for his personal safety, and accompanied by only four or five men, led a desperate and gallant charge up San Juan Hill, encouraging his troops to continue the assault through withering enemy fire over open countryside. Facing the enemy's heavy fire, he displayed extraordinary bravery throughout the charge, and was the first to reach the enemy trenches, where he quickly killed one of the enemy with his pistol, allowing his men to continue the assault. His leadership and valor turned the tide in the Battle for San Juan Hill. Lieutenant Colonel Roosevelt's extraordinary heroism and devotion to duty are in keeping with the highest traditions of military service and reflect great credit upon himself, his unit, and the United States Army.

He was the President of the United States who brought the nation to the forefront of the world stage as a world power at the dawn of the 20th Century. In addition, he was arguably the only true Renaissance Man of the late 19th and early 20th Centuries: historian, naturalist, author, civil servant, law enforcement officer, rancher, big-game hunter, taxidermist, wilderness explorer, boxer and martial arts student were only some of his many non-presidential accomplishments. Still, for the rest of his life, Theodore Roosevelt would always refer to the act for which he was nominated for the Medal of Honor as "my crowded hour."

As Assistant Secretary of the Navy under President William McKinley, TR strongly advocated US support of the independence movement in Cuba against the colonial government of Spain. As tensions heightened between Spain and the US, he took measures to prepare the Navy for war, going so far as to, while the Secretary of the Navy was on vacation, alerting the Pacific Fleet to prepare to attack the Spanish fleet at Manila Bay, Philippines in the event of a declaration of war; once the war began, the resultant battle was the most one-sided in the history of naval warfare.

Upon the declaration of war, TR resigned his post with the Navy and organized his own volunteer cavalry regiment; although a former infantry company commander in the New York National Guard, he elected to take the position of executive officer at the rank of Lieutenant Colonel under the command of Colonel Leonard Wood, a Regular Army surgeon-turned-line officer who had previously been awarded the Medal of Honor in combat against the Apaches. The 1st Volunteer Cavalry Regiment, quickly dubbed the "Rough Riders" by the public, was made up of a broad mix of Americans reflective of TR's own lifestyle: Ivy League classmates and uppercrust Manhattanites, New York City policemen, Wild West marshals and sheriffs, cowboys and Indians. A shortage of space aboard the transport ships enroute to Cuba resulted in only two of the three squadrons of the regiment going, minus all horses but those of the officers; the Rough Riders essentially fought as light infantry.

After the Rough Riders' first action at Los Guasimas, illness struck a number of senior officers higher in the chain of command; Wood was promoted to brigade commander and TR succeeded him as regimental commander just prior to the final offensive against the Spanish defenses around the city of Santiago, the most prominent of which was the San Juan Heights, actually a ridgeline consisting of Kettle Hill and San Juan Hill proper, both heavily defended with infantry entrenchments, machine guns and artillery. The Rough Riders were initially given a supporting role on the assault on Kettle Hill, but after the other regiments were pinned down, the Rough Riders took the lead with TR initially charging on horseback until they reached the first line of entrenchments and barbed wire. After seizing Kettle Hill, the Rough Riders turned their own machine guns, and those captured from the Spaniards, on San Juan Hill. TR then rallied the Rough Riders and the other regiments and threw their weight into the final assault on San Juan Hill.

The awarding of TR's Medal of Honor was one of the longest delayed in US military history. By all objective criteria, TR's valor and gallantry should have earned him the Medal of Honor, and a nomination was duly submitted by his chain of command. While it was enroute, however, he made the fatal mistake of criticizing the War Department in a letter to the press, after the US troops' departure from Cuba was delayed and the Rough Riders had been forced to bivouac in a mosquito-infested swamp, losing more men to malaria than they had in combat. The Secretary of War quickly squashed the award in retaliation, and 46 years would elapse before the name of Theodore Roosevelt would be seen on a Medal of Honor citation, and over a century would elapse before, in January 2001 after years of review by Congress and the Department of the Army, TR received his Medal of Honor for the Battle of San Juan Hill, eighty-two years posthumously. This makes TR the only person to be a recipient of both the Medal of Honor and the Nobel Peace Prize (for his part in negotiating the end of the Russo-Japanese War while President in 1905), and makes him and Theodore Jr. only the second father-and-son pair of Medal of Honor recipients after Arthur and Douglas MacArthur.

As it was, TR would become more responsible than any other individual for deflating the value of the Medal of Honor and making it the ultimate decoration it has become; upon ascending to the Presidency in 1901, he took measures to ensure that only those actions which surpassed his own in Cuba would be worthy of the medal, and his charge up San Juan Hill became the yardstick for future Medals of Honor.

The film Rough Riders was a collaboration of several of the cast and crew of The Wind and the Lion, a highly romanticized, very loosely based-on-fact epic about TR dealing with the kidnapping of a US citizen in Morocco in 1904, and several of the cast and crew of Gettysburg (including Tom Berenger) which the authors consider to be the most historically accurate fact-based non-documentary film ever made. Rough Riders predictably falls somewhere in between, although much of the deviation from historical fact appears to have been done for the sake of continuity and flow, with no blatant intentional misrepresentation of the basic history; as with most of the other movies discussed on this website, the acts of valor were depicted with little deviation from historical fact; the only dramatic embellishment was in the inflation of TR's own personal body count; he is depicted as gunning down no fewer than five Spaniards during the assault, whereas in his own account of the battle he recalls personally shooting at only two and hitting one of them.

(As an interesting aside, another Rough Rider, Trooper George G. McMurtry of D Troop, who had left Harvard University to join the regiment, would earn the Medal of Honor just over 20 years after San Juan Hill, as one of the commmanders of the "Lost Battalion" of World War I.)

The authors also could not help noticing a number of parallels between TR and another subject discussed in this website, Joshua Lawrence Chamberlain. Both men left secure civilian jobs of high prominence and prestige in order to enter the service; both had the opportunity to assume command of a volunteer regiment at the rank of full colonel but, recognizing their own limited military experience, elected to be second-in-command as lieutenant colonels with the command going to Regular Army officers; both men succeeded to command of their regiments when the Regular colonels were promoted to brigade commander, shortly before the actions for which each man would eventually receive the Medal of Honor decades after the fact; both men were hailed as heroes and elected governors of their respective home states almost immediately upon returning home from their respective wars. These two men were also, arguably, the two men most responsible for deflating the value of the Medal of Honor and maintaining the prestige and valor associated with it.