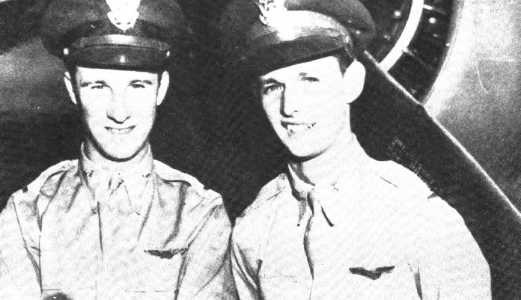 (on right, with 2Lt Kenneth Taylor, his wingman on the mission)

It can be argued that George S. Welch was cheated out of the Medal of Honor on two occasions, one of his acts of valor being depicted on film.

Welch was assigned to the 47th Fighter Squadron, 18th Fighter Group flying P-40 Kittyhawks at Wheeler Field, Hawaii in 1941. As a fellow fighter pilot of the 18th Group, Francis S. Gabreski (who would later go on to become the top American Ace in the European Theater in World War II) described him: "He was a rich kid, heir to the grape juice family, and we couldn't figure out why he was there since he probably could have avoided military service altogether if he wanted to." Many Japanese military aviators would regret that he hadn't. (Although indeed from a well-to-do family, from Wilmington, Delaware, his relationship to the grape juice family is apocryphal; Welch was actually his mother's maiden name and his father, a chemist for DuPont Chemical, was named Schwartz, but the family adopted the Welch name due to the anti-German sentiment during World War I.)

In the beginning of December, 1941, Welch and 2nd Lt Kenneth M. Taylor had moved their P-40s away from the main airfield at Wheeler to a nearby auxiliary field at Haleiwa as part of a gunnery exercise.The vast majority of Army Air Force fighters at Wheeler were parked in neat rows on the main flightline; although war with Japan appeared imminent, it was decided that the possibility of sabotage from the ground presented a greater threat than a potential air attack, and it was easier to guard them while parked in neat rows than dispersed on the airfield perimeter. Thus when the Japanese carrier-based sneak attack against Pearl Harbor and Wheeler and Hickam Fields came on the morning of December 7, 1941, the majority of the Army Air Force fighter force was easily destroyed on the ground, several of them when the first P-40 pilot attempting to take off to fight was hit and killed on his takeoff roll and his fighter went crashing down the flightline at Wheeler.

Welch got into his car with Taylor at the start of the attack and, braving the falling bombs and strafing from the Japanese planes, the two made their way to Haleiwa, taking off while the attack was in progress. They tore into the attacking Japanese formations, landed to rearm and refuel when the first wave of attackers left, and were back in the air waiting when the second wave attacked. Welch and Taylor were two of only a half-dozen American fighter pilots to get airborne on the Day of Infamy; while each of the six men scored confirmed kills, Welch was the most successful with four while Taylor scored three. Their actions were depicted in the 1970 film Tora! Tora! Tora! which was a comprehensive film about the Japanese attack on Hawaii.

Welch was nominated for the Medal of Honor for his actions on the Day of Infamy, and the Air Force Chief, General Henry H. Arnold was reportedly anxious to receive the nomination. Unfortunately for Welch, the intermediate chain of command, their pride evidently smarting from having been caught off guard and suffering the devastation they did, reasoned absurdly that Welch had taken off without proper authorization and could therefore not be awarded the Nation's highest military award; the award was downgraded to a Distinguished Service Cross.

Welch remained in the Pacific Theater of Operations and went on to score 12 more kills against Japanese aircraft. After the war, he became the chief test pilot for North American Aviation in Los Angeles, California, makers of a long line of successful fighters that began with the P-51 Mustang, generally recognized as the best fighter of any air force in World War II. Welch began testing the prototype P-86 (later redesignated F-86) Sabre, a new jet fighter which combined the aerodynamic advances of the propeller-driven Mustang with the lessons of swept-wing research the Germans had developed for their jet aircraft toward the end of the war.

As noted earlier, it can be argued that George Welch was cheated out of the Medal of Honor twice.

As noted elsewhere on this website, Charles E. "Chuck" Yeager is generally recognized throughout the world as the man who broke the Sound Barrier, i.e. flew faster than the speed of sound, in an experimental XS-1 rocket plane, an accomplishment initially kept a secret but for which he eventually received the Medal of Honor. It is believed that a number of Mustang and P-47 Thunderbolt pilots had flown supersonic in World War II but were unable to verify it in the heat of battle, and that the German Me-163 Komet rocket-powered fighter routinely went supersonic with the Germans not even recognizing the existence of a sound barrier. Still, Yeager has enjoyed recognition for half a century as the first man documented to have broken the sound barrier.

In an ironic twist, shortly after Yeager commemorated the 50th anniversary of his feat on October 14, 1997, by replicating the flight in an F-15 Eagle at the age of 73, the Air Force Times reported that a week before Yeager's XS-1 mission, the sound barrier had been broken by George Welch in a prototype P-86 Sabre. This feat was kept secret for even longer than Yeager's, at least originally, because it involved the capabilities of what was soon to become America's front-line fighter (which would in a few years dominate the skies in the Korean War), and also because Welch's supersonic flight had been unplanned and unintentional. All this was apparently forgotten as Yeager's reputation soared. Yeager was an active duty Air Force officer while Welch was a civilian employee of North American Aviation, but considering how soon after the war as all this had taken place, Welch presumably still retained a reserve commission and would have been eligible for the Medal of Honor under the same criteria by which Charles Lindbergh received it. Unfortunately and sadly for George S. Welch, he had been dead for over four decades by the time his feat became public knowledge; he was killed in 1954 in a crash while testing a prototype of the F-100 Super Sabre, which would become the last operational fighter in North American's Mustang-Sabre line of evolution.

[Ken Taylor also survived the war, scored at least two more kills, and retired from the Air Force in 1970 as a Brigadier General and commander of the Alaska Air National Guard, and is still living in Alaska as of June 2001.]

The actions of the main characters in Pearl Harbor (2001), played by Ben Affleck and Josh Hartnett, were clearly based on those of Welch and Taylor, but the way the memory of these two real-life heroes was obliterated for the sake of a sappy fictional romantic triangle, and their actions distorted into juvenile cartoon-like antics, were only some of the reasons we placed this film in the Hollywood Abominations category. The sequence in Tora! Tora! Tora! which depicted Welch's and Taylor's actual interception of the attacking Japanese waves was several notches above the sequences of Affleck's and Hartnett's characters in Pearl Harbor; Tora! Tora! Tora! used real airplanes instead of the fantasies of some clueless computer geeks reveling in their own hype. The one thing we can say for Pearl Harbor is that it helps Tora! Tora! Tora! stand out as the great enduring classical film it remains today, 31 years after its release. And we can only hold the forlorn hope that in the fallout from all the hype from this turkey, perhaps some renewed public interest in the real-life heroism of George Welch and Ken Taylor might be sparked, and give them their long-overdue recognition.