Peacetime achievement in the post-World War I era 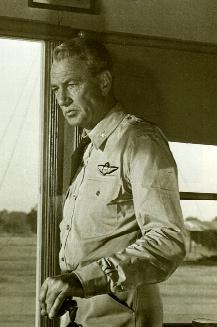 The Court-Martial of Billy Mitchell (1955)
Text of Citation:

AN ACT Authorizing the President of the United States to award posthumously in the name of Congress a Medal of Honor to William Mitchell.

Be it enacted by the Senate and House of Representatives of the United States of America in Congress assembled, That the President of the United States is requested to cause a gold medal to be struck, with suitable emblems, devices and inscriptions, to be presented to the late William Mitchell, formerly a Colonel, United States Army, in recognition of his outstanding pioneer service and foresight in the field of American military aviation.

SEC. 2. When the medal provided for in section I of this Act shall have been struck, the President shall transmit the same to William Mitchell, Junior, son of the said William Mitchell, to be presented to him in the name of the people of the United States.

SEC. 3. A sufficient sum of money to carry this Act into effect is hereby authorized to be appropriated, out of money in the Treasury not otherwise appropriated.

[Note: There is some dispute over whether the three men listed in the Peacetime Aviation section of this website, Charles A. Lindbergh, William Mitchell and Charles E. Yeager, were truly recipients of the Medal of Honor, due to the deviations in procedure leading to the awards, and the nonstandard medals awarded to Mitchell and Yeager. Lindbergh and Mitchell are listed on the US Army Center of Military History Medal of Honor Website while Yeager is not. Lindbergh is listed on the Congressional Medal of Honor Society's and the Medal of Honor Historical Society's lists of recipients while Mitchell and Yeager are not. All three men, however, were included in the Gallery of US Army Air Service/US Army Air Corps/US Army Air Force/US Air Force Medal of Honor Recipients at the Air Training Command bases where the two authors attended flight training. We have decided to give each man the benefit of the doubt and treat all three equally; we believed it would have been unfair to include any one of these three individuals while omitting any one other individual, particularly since all three were the subject of movies.]

The above citation gives no explanation, let alone any detail, as to why Billy Mitchell was given the Medal of Honor, so the uninformed may have absolutely no idea as to the story of the man known as "The Father of the United States Air Force". Mitchell was essentially awarded the medal posthumously as an apology from the United States Government, after having been court-martialed and his career terminated for being too outspoken an advocate of air power and an independent Air Force. It was also an acknowledgement of the accuracy of his predictions and prophecies.

Mitchell joined the Army during the Spanish American War and became a Signal Corps officer. When the Army's fledgling air service was placed under the Signal Corps, he became an advocate of the potential for air power to tip the strategic balance in war much farther than just as the reconnaissance force for which it was being used. Too old to be accepted into the Army pilot training program, he paid for his own lessons at a civilian flying school, which at the time were convertible into a military aviation rating. On America's entry onto World War I, he was sent to France on the Air Staff of the American Expeditionary Force and eventually placed in charge of all American frontline aviation units with the rank of Brigadier General. In September 1918, he led the largest aerial offensive ever seen at the time, in conjunction with the Meuse-Argonne Offensive, and was recognized nationwide as a hero for this feat.

After the war, dismayed at the rapid disintegration of the American aerial forces which he had built, he continued to lobby for expansion of the Air Service, its independence from the Army as a co-equal branch of the armed forces, and expansion of the Air Service's responsibilities for coastal defense. As part of the latter position, in 1921 he obtained permission to bomb a fleet of obsolete American and captured German warships as a demonstration; he shocked the world and converted several skeptics when he sank the entire fleet, including the German battleship Ostfriesland, until then thought unsinkable. Ironically, most of the converted skeptics were from the Navy, which then set in motion the growth of Naval Aviation and the carrier fleet, while Mitchell's own Army superiors remained not only skeptical but irate at his outspokenness. A series of less than favorable assignments followed, culminating in the termination of his temporary Brigadier General's rank and reversion to Colonel, and his reassignment to an infantry corps headquarters.

In 1925, a rash of fatal aviation accidents in both the Army and Navy, due to continued operation of obsolete and unsafe equipment, culminated in the crash of the Navy dirigible Shenandoah and the death of its skipper, Commander Zachary Lansdowne, a personal friend. This prompted Mitchell, from his exile at the infantry corps headquarters, to commit an act not unlike that which had cost President Theodore Roosevelt his own Medal of Honor during the Spanish American War: he committed the unpardonable military sin of criticizing his superiors in the press, in this case accusing them of criminal negligence. In the course of articulating the short-sightedness of the non-flying Army hierarchy and the inadequacy of the aerial force structure, he made the shocking prediction that Japan would eventually attack the American Pacific possessions of Hawaii and the Philippines with carrier-launched air raids without a declaration of war, and that the Army Air Corps would be unable to defend against these raids.

Mitchell was court-martialed in October 1925 for insubordination in a highly publicized trial, with many notable names in the aviation field testifying in his defense, including former wartime subordinates fighter ace Eddie Rickenbacker and then-Congressman and future Mayor of New York City Fiorello LaGuardia. The publicity further gave Mitchell a public platform for his views but to no avail for saving his own career. He was convicted and sentenced to five years' suspension from service. He resigned his commission from the Army rather than face the prospect of no duty and reduced pay, and spent the remaining 11 years of his life in civilian aviation and as a continued advocate of the buildup of American airpower. A unanimous vote was not required for conviction in courts-martial, and one was not obtained in this case. One of the panelists, who is believed to have voted for acquittal (although it was never confirmed), was a then-Major General who would in 17 years also receive the Medal of Honor after bearing the brunt of the Japanese attack Mitchell had so accurately predicted, Douglas MacArthur.

The film covers the life of Billy Mitchell from the sinking of the Ostfriesland through the court-martial and resignation. It was the second film in which Gary Cooper had the title role as a Medal of Honor recipient, 14 years after his Oscar-winning performance as Alvin C. York. (In addition to a few veteran actors in the supporting cast of this now often forgotten film were a number of unknowns, including two who would go on to become the stars of hit TV series in the 1960s and 70s, Jack Lord and Elizabeth Montgomery, who played the star-crossed Commander and Mrs. Zach Lansdowne.) Like Sergeant York and the vast majority of films covered in this website, it was a straightforward telling of the tale, with little dramatic license or embellishment needed to hold the audience's attention.